My friend John has been blogging recently about his journey from legalism to rebellion to faith.  His posts are honest and shine light into one  man’s discovery of Grace.

Inspired by John’s work, my Backstory series offers memories and moments from my past. I’ve lived long enough that, while the story of my life is far from finished, it’s long enough to see some of the patterns emerging. And I’d like to explore that.

—————–
I figure everyone eventually releases their upbringing wasn’t “normal.”  Does the “normal” childhood even exist?  I guess someone out there grew up in the quintessential American middle-class home with 2.4 children and meatloaf for supper every Tuesday, right?

But that is not my story.

To really understand myself, I have to examine where I came from, and specifically the people who brought me into this world. A post like this brings me dangerously close to spilling seeds of stories that probably my parents or family might rather keep quiet. I don’t know what to do with that. But I write to learn, and hopefully readers will be inclined to be gracious. 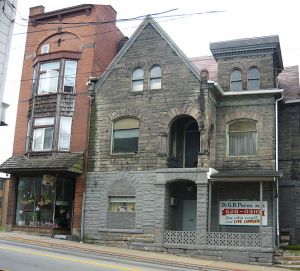 Typical architecture in Connellsville.
By Canadian2006 (Own work) [CC-BY-SA-3.0 (http://creativecommons.org/licenses/by-sa/3.0) or GFDL (http://www.gnu.org/copyleft/fdl.html)%5D, via Wikimedia Commons

My dad was born in 1932 as the oldest son (but 4th child overall, I think?) in the growing family of an Italian immigrant father and American mother (of German roots – isn’t everyone in PA related to the Germans?).

My dad’s childhood home on 7th Street in the little Western Pennsylvania coal town of Connellsville was sad and cold and hungry. His part of town was known for its immigrant population at the time; like most cities where I grew up, immigrants self-segregated themselves into communities united by a common language, culture, religion, and social groups.  His street was Italian; a few streets over was a Polish community; other groups included Croatians, Hungarians, Serbs, Bulgarians, Ukrainians, and the historic German and Scots / Irish folks who made it into Western PA a century earlier.

Connellsville, like so many of the small towns that cropped up rapidly to house the flood of Eastern and Southern Europeans coming in the early 20th century to work the coal mines, coke ovens, steel mills, and glass factories, offered gorgeous architecture for the coal barons and abject poverty for most of their laborers.

Dad remembered fishing for catfish in the nearby stretch of the Youghiogheny River, which was full of garbage and sinkholes and other dangers for childhood fishermen.  Up the road a bit from his 7th street home was Colonel Crawford’s Cabin, a relic left from one of the early settlers in the area who learned surveying under General Washington, fought in several Revolutionary War battles, and met a nasty demise at the hands of local Native Americans. (The Fayette – Westmoreland Historical Society offers a good one-page overview.)

In spite of the poverty and ugliness of his early life, Dad had a couple funny stories – the one about slinging his knit cap into a boiling pot of soup and turning it blue is pretty hilarious … until you realize that 1) the family’s entire meal was going to be  “soup” consisting mainly of water and a little fat and a few potatoes; and 2) I’m sure my dad was beaten for ruining the supper, and he certainly spent the night as a hungry and scared little boy.

I never knew my paternal grandfather.  Dad’s stories about him were few and mean.  My grandfather was apparently an evil man – a drunkard, abusive, neglectful, adulterous.

My dad, on my wedding day (obviously)

I don’t know a lot about dad’s upbringing, really.  He went to a parochial school? –  he was taught by nuns in elementary school. Apparently his 2nd grade teacher’s method for teaching long division was to bring students to the blackboard and paddle them if they couldn’t work out the problem correctly.  External motivation at its most basic. (He was still good at arithmetic by the time I knew him.) The school day opened with a psalm and a hymn – and Dad made a point of referencing this as a public school…. so I’m not sure how that fits in with the nuns.

Really though, school wasn’t high on my dad’s radar though he clearly wanted to do well.  He seemed to spend most of his boyhood days trying to avoid being pummeled by the larger, better-fed Polish kids through whose neighborhood my dad had to walk each day to get to/from school.  One of his best childhood stories centered on the year they lived in California — my grandfather had secured a job working in the submarine shipyards in Vallejo around 1942 so he packed the whole family in the station wagon and drove across Route 66.  Dad found himself in a different school, and quickly things came to blows between him and some other kids.  This time, though, dad landed his dream punch and shattered the kid’s nose.  The ring of school boys broke apart in amazement and Dad was a hero – if only for the day or the week or the walk home.

Back in PA in time for junior high and high school, my dad’s school career quickly took a second seat to work. His dad demanded room and board payment, so Dad got a job setting pins at a bowling alley every night from just after school until midnight or 1am.  He told me he never did his homework, really – he didn’t have time.  He bought a set of clothes (with his own earnings) at the beginning of the school year and wore them daily until they wore out.

I have no concept of that kind of poverty.

Next up:  Dad’s military service and then a career as a steelworker in Pittsburgh.