George C Marshall – the leader we needed – and still need

I’ve been reading a lot lately about General George C. Marshall. If you’ve heard of him, either 1) you grew up with me in Fayette County, PA and saw his name on the highway sign but didn’t know why, and/or 2) you have heard of the Marshall Plan to rebuild Europe in 1947-49 in the wake of total destruction from the war. 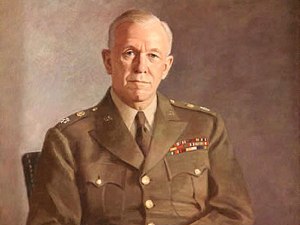 What I didn’t know (but Coart did, and he put me on to reading more about Marshall) is just how integral General Marshall was in creating the US military organization we have today, and establishing a US foreign policy for the Cold War era that might avoid hawkish bloodlust for destruction.
As Army Chief of Staff, Marshall transformed the US Military in 5 years from a woefully underfunded and unprepared force to the global powerhouse that punched the Nazis in the face. To list his accomplishments would require more words than you’re probably willing to read right now.
What really matters is that General Marshall was apparently one of the most incredible people. His unmatched personal integrity allowed him to unite a viciously divided Congress behind urgent causes like drafting men into the army in 1940 when most of America wanted nothing to do with Europe’s war (but Marshall knew it would come for us), or getting $2 billion in funding for the Manhattan Project (atomic bomb) despite not being able to tell the congressmen what the money would be for, or convincing Congress to spend half a BILLION dollars a month in 1947-48 to enact the recovery program for Europe. His personal integrity anchored his reputation and people trusted him.
He was probably the finest organizational leader, personnel developer, and military strategist of the 20th century…maybe in America’s history. Churchill called him the architect of Allied victory in WW2. Time put him on the cover of Man of the Year twice in the 40s. He is likely the only active military commander to win a Nobel Peace Prize. He trained or mentored 150 of the WW2 field commanders (and higher) who supervised multiple field armies and led millions of men to victory.
Some viewed him as austere and aloof; his close peers saw his kindness, generosity toward others, deep concern for human life, love for the front-line soldier, and dry humor. The more I’ve read, the more impressed I am, and the more I wish we had leaders around right now who could muster even a slice of his strength of character, dedication to the Constitution, and wisdom.
I’ll post a couple recommended reads below, if you want to put a book on your Christmas list.
PS. For my hometown peeps – Marshall’s dad founded coke ovens in Dunbar, Fairchance, and Cheat Lake, and built his brickworks on what became the Pechins parking lot. His family lived just off the National Pike near the historic inn, not far from Jumonville / Fort Necessity, and they summered up in the mountains nearby. He did survey work on Chestnut Ridge and fished the Yough (maybe near Ohiopyle?) He left PA to attend VMI and never really returned except for a couple visits, but I feel like he’s got the stamp of Western PA all over him. Go listen to a video clip of him testifying before Congress….. I know that accent. 😉 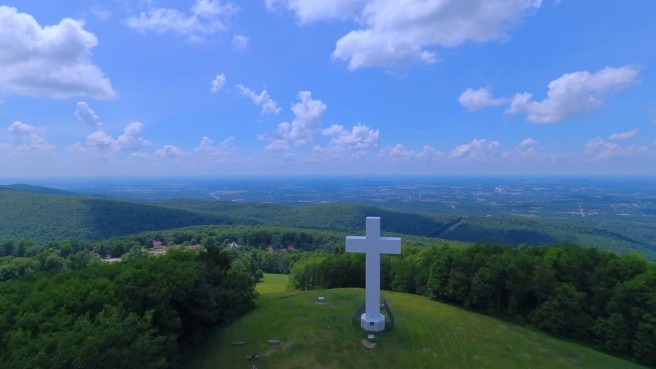 Jumonville, PA was near Marshall’s home place and he fished, hunted, and played in this vicinity during his boyhood years from 1880-1898, when he left to attend VMI.

Documentary – George Marshall (American Century) – Amazon Prime*
An excellent 90-min overview of Marshall that really highlights both his brilliance as well as his humanness.
The Marshall Foundation & Library offers a wealth of excellent resources. You can read plenty about Marshall’s work and biography, watch recorded lectures from visiting historians, and access quite a bit about Marshall’s life.
General of the Army: George C. Marshall, Soldier & Statesman *
Ed Cray wrote a solid and informative one-volume biography of Marshall using many of the sources assembled by Forrest Pogue, Marshall’s official biographer who wrote four volumes. I don’t have time to read 5,000 pages. If you don’t either, then I recommend this one. It’s clear and easy to follow.
American Warlords: How Roosevelt’s High Command Led America to Victory in World War II *
Jonathan Jordan is an amateur historian and practicing lawyer in Georgia who loves to write well-respected historical accounts.  Go, Jonathan!  This is the book I ordered my father-in-law for Christmas. It’s very very readable — almost to the point it would make career historians a wee bit nervous by how he leans hard into the storytelling part of history, and maybe filling in some details in between the facts.  But it’s a really good read about how FDR, Marshall, CNO King, and Sec. of War Stimson found a way through the infighting and bureaucracy to hold the Allies together during the darkest years of the 20th century.   I think you’ll like it, whether you’re a “history person” or not.
-Coart recommends Rick Atkinson’s An Army at Dawn * if you want to read a more holistic discussion of just how completely unprepared America was in 1939 for a global war.  (Again! That’s what Marshall complains about in his WW1 memoir! We learned nothing!)  Atkinson’s first of three volumes (the other two are out as well) covers the North Africa campaign.
– Marshall & His Generals * by Stephen Taaffe — I watched Taaffe give an excellent lecture on how Marshall selected top commanders for the European & Pacific theaters, and how well those men performed overall during the war.  Taaffe’s book is a combination of individual biography and overview of the major campaigns of World War II. Along the way, he offers analysis of how well each commander performed his duties in advancing the war effort and the interpersonal drama that surrounded some of them. It’s a neat lens if you’re interested in leadership studies.

Check your library for these:

–Marshall —  Memoirs of World War I (1917-1919) — he asked that this manuscript be destroyed because he was so careful to remain politically neutral, and any military decision is eventually political or politicized. But his stepdaughter found this in the attic in the 70s and published it.  If you’re into WW1 history, you’ll find it interesting.  Young Marshall (he was a Captain when he went over; left as a Colonel I think) cut his teeth on the incredibly difficult logistical and organizational problems of making the US military a modern fighting force in the midst of trench warfare and horrible fighting. He would do that all again in 1939, and this shows you how he took in information, made decisions, experienced the war.
-Katherine Marshall – Together: Annals of an Army Wife — George’s second wife Katherine was his companion throughout the difficult 1930s-50s (his first wife died after they were married like 25 years). I really like her short book; it’s a nice window into a man who was so private and self-disciplined that people thought he was cold.  Nope. Marshall had a great sense of humor and was really personable to all types of people — all while being a rather imposing military commander. Her account is very sweet.
–Forrest Pogue wrote 4 volumes of Marshall biography; the library will probably have them.  Overkill?  I prefer a more condensed analysis, but he’s got a billon details if you want them.
I did read through much of the one-volume transcripts of Pogue’s Marshall interviews, and enjoyed seeing Marshall tell his own memories in his own words.  You’ll get all of the best bits in any of the standard biographies, but academic libraries probably have this work.
*These links go to Amazon. I get like a fraction of a penny from affiliate links, so click ’em if you want to tip me. 😉