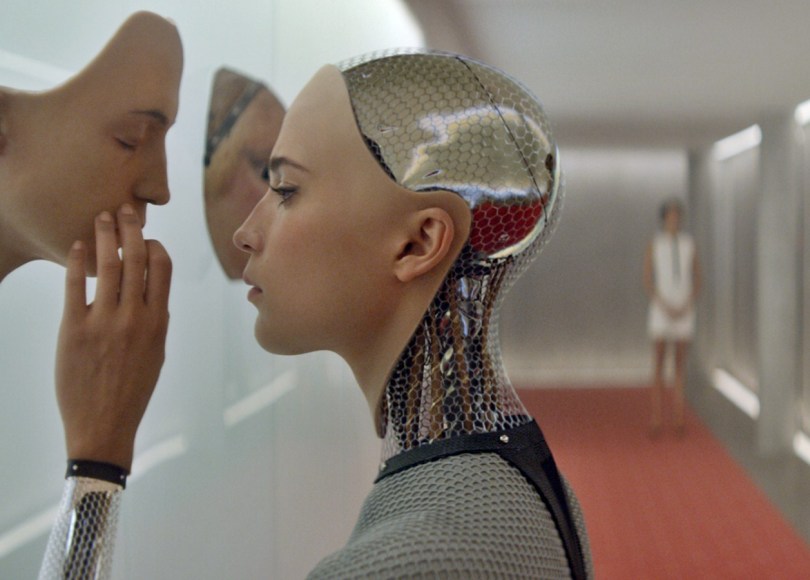 N.B.: The film earns its R rating due to language and shots of full female nudity, so some portions will not be suitable to pre-college classrooms.

Ex Machina (streaming on Amazon Prime) is a cerebral sci-fi film, taking us deeply into questions about human intelligence, sentience, consciousness, gender identity, and scientific morality. A well-crafted story in its own right, the sparse cast (only 4) and single location suggest the film is closer to ‘indie” (made on a very tight budget) than anything that usually hits our screens. That tight budget still paid for 4 fantastic actors and some incredible VFX work.

We create in our own image. I think Ex Machina is, at its core, an “image of the Creator” story. There are plenty of these – the Avengers: Age of Ultron film is exploring some of the same ground. But Ex Machina does this theme really well. The ending leaves us with many questions.  One of them (to me) is to wonder whether Ava is merely acting out what she learned from the only two humans she’s ever met. (He who sets a trap will fall into it, as the proverb says. Maybe that explains her actions toward Caleb in the final scenes?)  If so, is she morally responsible for her choices?

Parallel reading: It’s hard to beat George R. R. Martin’s short story “Sandkings” when you’re looking for an example of just how bad an idea it is for humans to “create” in their own image.

It’s extremely difficult to define human-ness, or even consciousness. The film forces us off-balance, constantly observing (just like Caleb) and assessing Ava. Is she “human enough”? What would that even mean? Scientists keep changing the rules of the original Turing Test as our AI’s get smarter and more useful. We’re struggling to define the edges of consciousness.

Alex Leadbeater wrote an excellent discussion of this theme on WhatCulture. I recommend checking it out and adding his article to your discussion material.  He also delves into some of the nuances of the characters’ actions and choices, and offers a few explanations for the ambiguous ending.

And, of course, for those who view humanity through the lens of Christian theology, the questions get even more interesting. Can humans create an intelligence that’s “better” (morally, ethically) than we are in our brokenness? If we hold to the idea that the imago Dei principle must extend to our own creative efforts – that we cannot escape making an intelligence in the shape of our own humanity – does that intelligence have any chance of choosing a higher moral ground? Or will an AI drive us all to extinction or termination (as nearly every sci-fi story seems to fear)?

To put it another way, would it have made the story stronger or weaker if Ava had shown mercy to Caleb in the final scene and released him from what seems to be a death trap?  His own trap, but one he set on her behalf. (Leadbeater suggests an alternate reading of the ending that makes Ava less of a cold blooded killer.)  Anyway, I’m glad the film doesn’t send Caleb and Ava off into the romantic sunset to live out some kind of weird AI – human relationship.  But I was a little stunned by her actions in the ending. That was disappointing too. Must all of our AI’s be dragged down by original sin, too? I s that the fate of human creation?

Ava’s journey also reminds us that true sentience must involve self-will, and that means (from the perspective of the human creator) loss of control.  Is that what we fear most from the idea of artificial intelligence – that we will lose control? Why don’t children terrify us the same way?

Perhaps – if humans ever do create a genuinely conscious AI – we will begin to understand much more about the paradox of free will vs determinism (especially when that question rolls into theological realms and takes up the mantle of “the problem of evil“).

Ava’s final scenes show her applying “skin” to her frame, examining her appearance, putting on clothes, and blending into humanity. Her conscious intelligence cannot take her into the realm of humans safely. There’s a lot of feminist imagery in those final scenes, as she is “born” into the world of men through her rise to the surface. Worth discussing.

I use Amazon affiliate links, and if you click on a link to a product I may receive a small portion of the sale. Thank you for supporting my site!