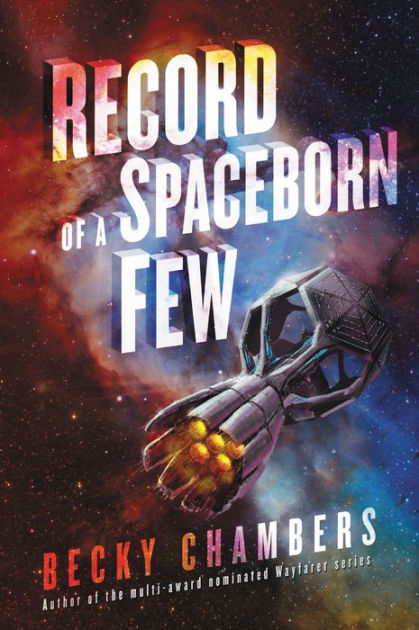 Record of a Spaceborn Few (Amazon), by Becky Chambers, is the first book I picked up this spring when the 2019 Hugo Award nominations were announced. Having read and enjoyed her first two – not without flaws, but a very promising start for a new writer — I was excited to dig into book 3 of the Wayfarer series.

Clearly, this book sparks strong reactions. Goodreads reviews fork between 4’s and 2’s. Chambers is quickly growing as an author with the sensitivity to personal and social issues relevant to space opera stories. She’s not LeGuin, but there’s a lot of Ursula in her.

RoSF is a quiet book. It moves smoothly from scene to scene, not quite as smooth and snappy as a Scalzi (he’s almost too snappy, honestly, in recent works, bordering on becoming his own cliche), but flowing from point to point like a backwood stream.

Chambers’s Wayfarers series tells unconnected stories (so far) of various people in the same universe, where Earthers had to leave our planet in generational ships due to the destructive effects of climate change. They were limping along in deep space when an alien race found them and share crucial technologies  (power production, materials, food, etc) and laid the foundation for the Terrans to join the galactic community.

This third entry in the series takes time to explore what earlier books had not — the life of the humans who have elected to live in the orbital community of still-functioning generational ships, rather than leaving to work on transport ships or moving to a planet.

In many ways, the Earth fleet is a backwater small town, and its citizens face many of the same questions as someone from Nowhere, USA:  do I stay? leave? Are there jobs here that I want to do? What will I lose by leaving my community? What would I lose if I stay?

And likewise, there are always at least a few folks moving back, either because they seek their roots, or there’s something about the life on the fleet that appeals to them. The promise of the Earther fleet: we will feed you, house you, clothe you. No one will go hungry, or be left without aid. But in exchange, you will work, you will conserve materials and resources, you will learn to be part of the community.

*****
The novel tells its story by weaving together the journeys of five disparate residents of one Earth fleet ship:  a teen boy trying to decide what he’ll do with his life, a woman whose husband is gone on long-haul mining runs while she raises their two kids alongside their extended family, a 20-something drifter who left his lackluster planet life to find his roots in the generational ships, an ship archivist who cherishes her role preserving culture and making interspecies contact, and a young woman who serves as one of the Collectors of bodies once a person dies – nothing is wasted on a spaceship; human remains are composed and become part of the life cycle of the ship.

I enjoyed Chambers’ quiet revelations of these characters’ lives and decisions. Sometimes books need to be all explosions and action — and there are moments of fast-paced drama in this novel, though not many.

But big setpiece spectacles can leave out the quiet questions that would follow any sentient being into space, until eternity — why am I here? What am I supposed to do with this life?  How do I balance the tensions of family and community obligations against my own ambitions?

Books hit you differently at different times in your life. Perhaps I would have tired of Chambers’s third novel had I read it as a teen, but as a 40-something woman staring hard at the second half of her life, I appreciated Chambers dedication to asking the human questions that persist, regardless of whether we take to the stars or stay here.

The Collectors’ rituals especially interested me. Death is part of life, so how could we make loss more meaningful and purposeful? I loved the image of a “caste” of caretakers who help families navigate grief partly through training and partly by helping return the bodies to the “ground” whence they came, to be composed into the soil for the ship’s gardens.  Rituals reveal what a culture values, and Chambers’s future humans offer us an inspiring template (though not without its flaws).

Some criticize Chambers’s world for being too optimistic, lacking the ugly edges of a real human society.  I prefer to see her as standing in the best of the optimistic sci-fi tradition o Star Trek (for example), holding firm in the belief that we all stand to gain much by seeing examples of humans who have solved some of the worst problems of humanity.

Rating: 4/5 stars
Recommended for fans of her earlier books, and those who appreciate the quiet social science of LeGuin (but don’t expect that level of craftsmanship in the writing).

Hugo ranking – I haven’t set my 2019 voting ballot yet, but I will put RoaSF somewhere in the upper half.