Last night, Newspring Church met offline with its congregants to discuss the future of the church without the rockstar fallen from grace Perry Noble. I haven’t kept up with the church’s pastoral drama in the past year, but I stumbled across a Twitter live-blog last night of the meeting, and it’s worth noting a few things. 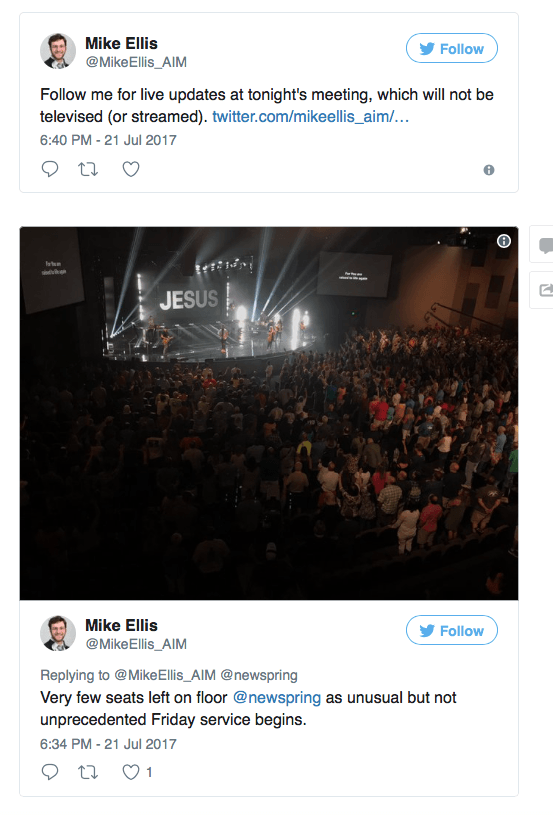 First, it’s notable to me that Perry crashed and burned as hard as he did.  I wouldn’t say that every megachurch pastor will meet this fate, but Francis Chan articulated recently the way that power and fame begin to chew away at the foundation of your soul. (I recommend reading his remarks.) When 100,000 people are watching your hologram preach on Sunday, you are being tempted by Power. And Tolkien taught us well that only the most humble can carry such Power without it corrupting them – and even then, the burden of it leaves wounds that may never heal.  I’m genuinely sad for Perry Noble’s fall from grace; I hope that he finds peace, healing, and restoration.

Second, I’m glad to see a humbler Newspring tone from the leadership, based on this reporter’s observations of the meeting. Pride doesn’t look good on anybody, especially a church, and Newspring always had a chip on its shoulder about being the biggest and the mold-breaker.  Humbling itself to follow the wisdom of more experienced church leaders wasn’t their strong suit.  They were happy to be the outlier.  Problem is, lone wolves get eaten — and that’s just as true for a church as it is for a person.  This was a very fundamentalist streak within the Newspring culture (I’m not saying they’re fundamentalist – they aren’t), for Southern Baptists in general tend to have that “you can’t tell us what to do” streak of American individualism in their DNA.

The pastors who spoke mentioned that they are moving to a group leadership model — or as we Presbyterians call it, “rule by a plurality of elders,” a much stronger and healthier church leadership approach. It sounds like the leadership are trying to move forward together, slow their roll a bit, and trade growth in numbers and dollars for actual development. This is good. They want to see shepherding group growth over butts in the seats — also a much-needed change in emphasis. Having Perry Noble as the hood ornament of a giant machine was never a good idea. I’m glad his departure didn’t wreck more than it did (though there’s been quite a bit of damage).

I’m not saying everything here is 100% comforting – there’s still some of the rally feel (like when they talk about how much money they gave to community projects last year), but that’s true of every church.  Also, I’m not certain they’re theologically grounded enough to provide more than the barest surface-level preaching.  Newspring’s model has been “get your friends here and we’ll introduce them to Jesus,” and they’ve been effective at that (though the sacerdotal smell of it makes me cringe). But the model worked well for what it was intended to do: get people to church. That was Newspring’s mission: get people saved, not necessarily do the hard work of discipling them (IMO). Hopefully that will change.

Probably the biggest red flag to me continues to be Newspring’s disparaging of theological education (another Southern, fundamentalist characteristic in their culture). Did you catch the comment that moving to a  group of preaching pastors reinforces the idea that preachers don’t have to go to seminary to be able to preach?  Interesting remark given that preaching pastor Clayton King is an adjunct faculty member at Anderson University’s nascent divinity school.  Ignorance and good motives can carry a man only so far in the pulpit. At some point, people need to be taught Bible content, theological frameworks, and pastoral care.

I wonder about the future of Newspring College.  Newspring has spent years now discouraging young people from getting a seminary education and jumping into ministry after a year of training on their campus. The NS College website notes that students will carry a heavy load  in the Newspring services, including the big Christmas Eve and Easter productions. This bothers me. It looks like a farm for unpaid labor that will produce a lot of really young, really underprepared 20-somethings to throw into ministries around the world.  But I’m willing to live in peace with Newspring on this point. Formal education has never been a critical element of the Gospel, and for some minority groups, it’s a discriminatory practice that bars them from leadership positions (see: PCA). There are far worse things a 19 year old can do with a year of his life.

I haven’t been to a Newspring service in a long time. I still appreciate the energy they put into their services, their heart-felt intensity. I understand why so many “churched” people fled their churches to join the Newspring movement in the mid 2000s. Most churches aren’t feeding their congregations much in the way of biblical content, and when “church” boils down to being a social club, it’s easy to get bored with the one you’re in and leave for the one that’s got better facilities, a great show, and fun leadership. But church was never supposed to be about those things…. I think the New Testament model is much more about “doing life together” around the Word and sacraments and prayer.  You can’t do that via a once a week meeting; doesn’t matter how big or small the operation is.

Newspring is an arm of The Church, and though I’ve often disagreed with their emphasis and practices, I have seen them preach the Gospel to people who need it and love many types of folks who would never be willing to step foot in traditional Evangelicalism. All Evangelicals can learn from that. For this reason, I defend Newspring’s right to exist, to muck around and make mistakes just like all churches and denominations do. Have they “done damage” to the “cause of Christ”? Well, in the minds of some, they certainly have. But show me a church or denomination who hasn’t.  Much of the Newspring hate around here seeps out of old wounds, back when a very arrogant fast-growing church sucked thousands of people out of other churches’ pews.  Doesn’t mean I’m not going to recognize Newspring for what they are: fellow believers, brothers and sisters in Christ.

So I wish Newspring well and hope that this painful year bears good fruit in bringing their leadership to greater wisdom and maturity.