Idea for a course on “rhyming history”: lessons from the past to navigate today

Supposedly Mark Twain said something like, “History doesn’t repeat itself, but it sure rhymes,” and with that in mind, I was struck by the quality of book recommendations in this conversation I had with a Facebook friend today.

My friend, who does social media under the name “Theo Logos,” is a voracious reader – well outpacing anything I could hope for in my paltry Goodreads goals for the year – and our conversation this morning about Mark Twain’s disdain for Teddy Roosevelt turned into an outline for what would seem to be an incredible college course (or personal reading journey) through turn of the century American imperialism.

While Trump’s policy speeches have turned from American intervention abroad toward an inward focus on insular defense (buttressed by a jump in nationalistic rationale), I think Trump’s underlying view of the world remains about as imperialistic (might I say even jingoistic?) as anything Americans saw from their leaders in the late 1800s.

Few history courses teach high schoolers or college students about the horrors of the Philippine war – an assault by America against Philippine sovereignty justified by the US protecting its own interests. Yet that is one reason why Mark Twain looked upon his own age with horror.  American leaders (like Teddy Roosevelt) who occupy a nostalgic corner in my brain were the men who offended Twain the most because of their policies and aims.

As soon as we were old enough to walk by ourselves as a nation, the US has used its might (later buoyed by the decimation of Europe and parts of Asia in World War II) to further our agenda in the world.  Often this has resulted in geopolitical disaster. Consider the aftermath of the US overthrowing democratically elected governments in the 1950s and 1960s because we were afraid those nations would align themselves with the USSR. We installed fascists and dictators into places like Argentina, Chile, and Iran so that we could control them.  Usually, that ended poorly.  Sometimes it created a horrific mess leading to disasters like the rise of ISIS.  We need to learn from past mistakes, and studying the roots of American imperialism offers much.

Plus, looking at history through the eyes of literature and culture makes history come alive, and offers readers/students a sense of context for the biting satire that Twain and others produced during this rough and tumble age in American politics.

So I’d like to put this out here in case any history teachers want to take up the challenge to create a course about the way American imperialism rhymes with current political discourse about defense spending and immigration restrictions.

We need to learn history’s lessons so we can stop repeating them, a little bit louder and a little bit worse.

Below the screenshots, I will link out to the books and articles mentioned here. 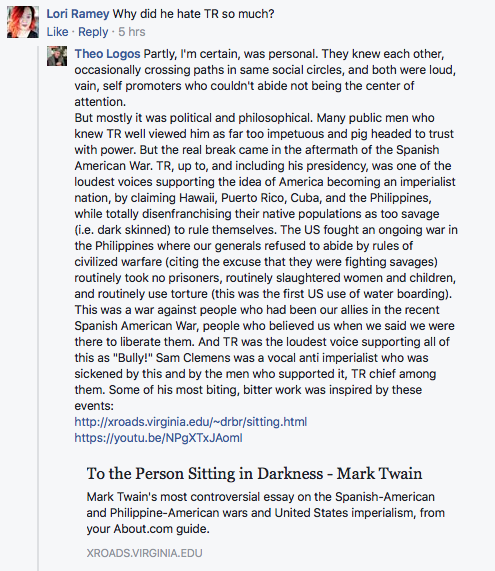 Essay: To the person sitting in darkness (Twain)

Book: The Statesman and the Storyteller: John Hay, Mark Twain, and the Rise of American Imperialism, by Mark Zwonitzer (Amazon)

Book: The War Lovers: Roosevelt, Lodge, Hearst, and the Rush to Empire, 1898, by Evan Thomas (Amazon)

Novel: Empire, by Gore Vidal (Amazon)
One way to understand the past is to embrace a well-written fictional retelling. Vidal’s incarnation of the Gilded Age brings home this age of excess.

And for more, you can visit Theo’s full shelf of books on American Imperialism at his Goodreads feed (Goodreads)