Happy to report that I beat my 2016 goal for reading books. I read a lot more short pieces than book-length works – if you added together the thousands of words I consume daily via articles, it’d probably equal a book a month.

But I’ve noticed my attention is sporadic and fragmented these days, so I’m committed to reading longer works so I don’t lose my ability to concentrate. 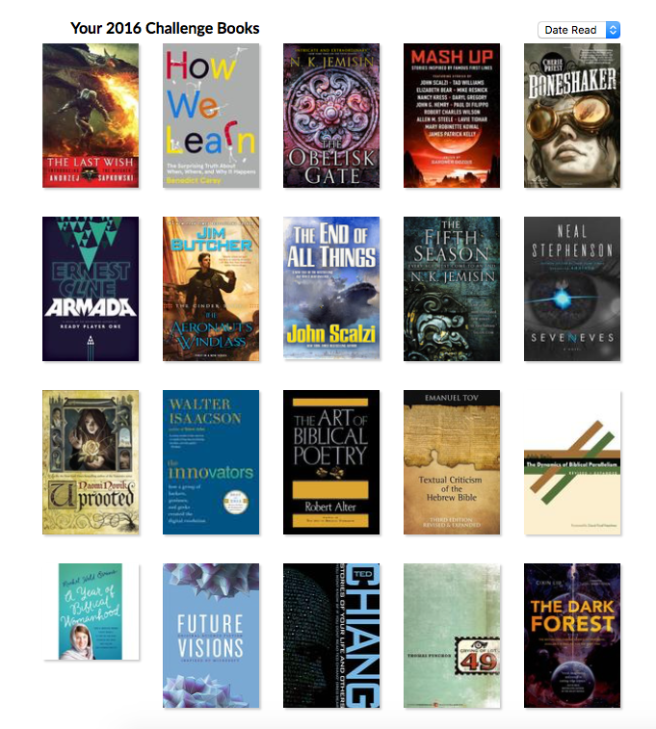 If I were to flag any for particular recommendation it would be these:

Walter Isaacson, The Innovators – the story of the pioneers who invented the digital machines that gave us the computer age. Absolutely fascinating deep dive into the conditions that allow creativity and innovation to prosper – and cautionary tales of those whose ideas languished because they weren’t working in a supportive environment.

NK Jemisin, The Fifth Season – this novel won the Hugo this year, and it was one of the most interesting books I’ve read in a long time. A gritty fantasy novel that allegorizes the nastiness of racism, written by a Black woman. I couldn’t put it down.  I also highly recommend the novel I listed as #2 on my Hugo ballot, Uprooted by Naomi Novik.

Ted Chiang, Stories of Your Life and Others – a striking short story collection well worth your time. The title story formed the basis for one of 2016’s best films, Arrival.

****
There are times when I’m kind of embarrassed that I don’t post huge reading lists year after year. For someone who loves books (have you seen my house?!), I don’t read as many as I feel I should. My work is mental rather than physical, I read articles and essays extensively, and I soak up stories through video games and films.

One of my 2017 resolutions is to feel less guilty about things that aren’t wrong and that I probably won’t change. I’m aiming to read 20 books in 2017 and stop beating myself up for not reading more. I just ordered the next two novels in the Witcher series – I’m excited about those! -and I’m already halfway through Cixin Liu’s final novel in his trilogy. In nonfiction, I want to return to the excellent book on education, For White Folks Who Teach in the Hood and the Rest of Us Too. Dava Sobol has a new book out about some women in science in the 20th century; can’t wait to get my hands on that. I might even pick up the Stephen Ambrose condensed biography of Eisenhower that Coart can’t stop talking about. Oh, and John Scalzi has a new novel coming out this spring, plus the 3rd book in Jemisin’s series. It’s going to be a good year!