My Backstory series offers stories about my upbringing and background. You can find the whole series under the category “Biography,” if you’re interested.  Today happens to be my parents wedding anniversary date – it would have been their 42nd.
~~~~~~~~~~~~~~~

My mom was one of those indomitable women, the working ones who juggled career and child-rearing and house cleaning and everything else without losing her sanity. Most of the time.

For as much as working parents fret about ruining their kids, I think  I turned out ok. My earliest memories were of two parents juggling their schedules and me alongside my teenage half-brothers.  Dad worked swing shifts that involved occasional night work, but his preferred was second. Once I started school, he swung his schedule back to daytime so he could pick me up after school.

Mom had a more “regular” job as a loan clerk at a finance company. Yeah, the loan shark company that gave people money at like 30% interest. It was a job, and she was good at it, and I doubt she’d had a lot of options when, as a divorced single mother in the 1960s, she first hit the pavement looking for employment.

So by the time I came along, she’d worked at The Associates for at least a decade. In fact, I’m pretty sure that’s how my dad met her…. making payments on a small car loan.

Mom’s job was pretty decent when I was a wee lass. She worked in my hometown of Connellsville; at least, that was the closest actual “town” to where we lived, since I hardly consider the mountain hamlet of “Normalville” a town. Normalville had a post office and an ice cream place and maybe a gas station.  Connellsville was a bustling metropolis by comparison. 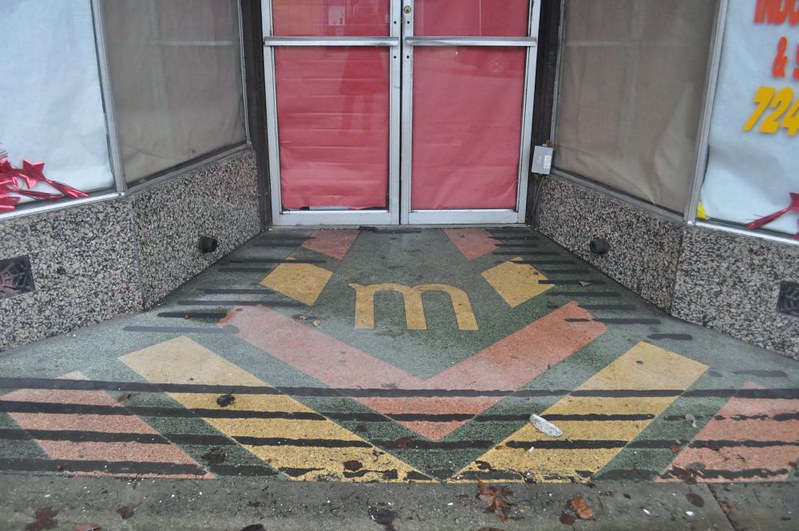 And The Associates had a branch office near the center of town next to a Health+Mart and across the street from a number of fascinating shops including a Murphy’s and McCrory’s and Woolworth. Sometimes after kindergarten or on summer days when I had nowhere else to be, I ended up playing on the chairs in the guest waiting area, or killing time in one of the conference rooms.  Mom’s bosses and coworkers were always nice to me. I remember one of them trying to help me learn to tie my shoes. I think I was a helpless case at the time, but velcro was about to bust onto the scene, along with jelly sandals, saving me from some serious frustration.

And at lunch or in the afternoon, sometimes she and I would walk into Health+Mart to buy a giant Crunch! bar or across the street for an ice cream, and talk to the friendly old men who sat on the benches and liked to touch my hair. Mom knew they were just being friendly, not creepy, but it always pissed my dad off if he found out.

Because Mum had worked in her industry for so long, she knew the ins and outs of loan paperwork and interest and processes apart from adding machines or computer programs. That always amazed the 20-somethings who worked alongside her. “How do you KNOW that?” they’d wonder, looking at my mother like she was some priestess of an ancient tribe, hoarding the secrets of a sacred order of finance to which they had never been invited. She knew how it all worked. And whenever the computers went down (sometimes for a day or more), her loan paperwork was still moving right along, powered by her knowledge and a hand calculator.

Growing up, I watched her office morph from punch-card IBM computers (no kidding!) to one of those classic 80s era IBM systems with the black monitors/green type. (Or maybe it was orange?)  The keys on the computer keyboard were extra clacky back in those days…. a stiff tactile memory. And IBM typewriters and Selectrics, where loan papers had to be typed in triplicate with carbon paper in between the sheets.

I know because by the time I was in double-digits, Mum had me helping her with paperwork. Her job got busier and busier, and there was always more filing and typing than she could keep up with. And some of the work was truly mundane, perfect for a bored 12-year-old on a weekend or lazy summer day.

I wish I could say my mom loved her job, but she didn’t.

Around the time my dad lost his sight and thus his job in the steel mills, Mum’s office closed and they folded in her branch into one further away, about 30 minutes down the road in Uniontown. Her commute instantly make it far more difficult to drop me off or pick me up from school, and I found myself riding busses with the public school kids…. but that’s a story for another day.

Her office situation in Uniontown wasn’t as friendly or welcoming. The coworkers were decent, many of them, but offices always incite drama. One lady was sleeping with the boss, so she got extra favors. The men, who held the assistant manager positions, got paid way more than the women who shuffled the papers. The boss was basically a drunk, and though he was always nice to me, he could be nasty to his employees.

[An important side story: I got married after my mom had died. Several of her coworkers were incredibly kind to me during the months leading up to my wedding. One of those ladies baked our wedding cakes, and the entire office gave us a wedding gift.]

Things went from bad to worse and Mum faced a difficult choice. Locked into her job as primary breadwinner for her family, she could either trudge along doing loans, or she could move in the assistant manager position over Collections.  It was a rough gig, calling people who had defaulted on their loans and threatening them with whatever worked to get them to pay up. Or sending out the “repo man” to repossess whatever collateral backed the usury that folks were paying to this loan company to finance their summer vacation or last year’s Christmas. And unlike all the men who’d held this job before her, my mother wasn’t given an office assistant to shuffle her paperwork. She was now responsible for all of her former cases as well as all the new work of being a supervisor.

The pile grew large. I showed up on many more weekends during my teenage years, even one entire week during the summer, to type and file and process records. I learned how to read a credit report, how to properly file last names beginning with Mc-, how many horrible cuts and hang-nails you get when filing papers, how to send faxes and read the faint lettering on the shiny papers, how to do data entry.  It was actually a pretty good gig for me as a teen job for a little money here and there, though often my earnings disappeared when the money ran short at the end of the month, and Mum had to “borrow” it from me to buy gas. I resented that, and didn’t really see her point when she reminded me that I was getting a whole lot out of my parents already …. I don’t think any teenager is quite ready to understand that lesson.

Mom’s work hours got longer and longer and she felt more and more stressed, trapped by a job that didn’t end and the financial burdens of owning a house my parents had built when they had two incomes. We were the classic example of “house poor,” and since my parents had spent half of their lives waiting to finally build a house, they weren’t about to give it up. So we — and she — soldiered on.

Dad and I were pretty sure that the stress of her job contributed to the onset of breast cancer when I was 12 and she was 50, but who can say? She had a family history of the disease but none of us could deny that The Associates didn’t offer a safe, nourishing environment for her soul.

After the diagnosis, biopsy, mastectomy, and recovery, Mom want back to work. What else could she do? We needed money, and her salary was decent given the opportunities available in Fayette County.

My mom’s story is one of surviving. Trudging. Working. Earning. Coming home exhausted and worn down. The story of working mothers everywhere in America, where “work-life balance” really is a laughable term….. Turning down promotions for better positions away from the bullshit in her office because she would have been forced to move away from our family home (and my school). Running a side business in the springtime preparing people’s taxes because she could earn a little extra money to pay off just a little more of my Christian school tuition. Juggling the books and robbing Peter to pay Paul so everything more or less got paid and we all more or less had food to eat.

She didn’t complain. She set her jaw, and she worked.

Because that’s what working mothers do. They sacrifice everything they could have been and all of their own dreams for the sake of their children’s futures. They drop us off at college, give us a hug and a kiss and a pep talk, and hold themselves together so the weeping doesn’t start until they’re in the car for the lonely ride home.

She didn’t get the chance to see me grow up enough to understand just what my opportunities cost her. That, to me, is one of the world’s great injustices.