It’s Olympics time. What does that mean for my household?

Well, even if an epic snowstorm in the Southeast weren’t sitting on top of my house, forcing me away from going into my day job and opening up dozens of extra hours for Olympic watching, I’d still be glued to the TV whenever I had the chance.  You have no idea. I loooooooove me some Winter Olympics.

As the world knows, the ’14 games are in Sochi, Russia. Where’s Sochi?  On the Black Sea. Where it doesn’t really look that cold and where the downhill slopes are coming in at 60 degrees (a bit too warm for good snow).   And where things aren’t entirely put together all neat and tidy, as a flood of amusing tweets showed last week when journalists started arriving.

That’s old news.
As is Shaun White’s disappointing 4th place finish on the half-pipe, but at least we can feel good about the guy, despite the media hype that he’s cold & not un-chill for a skater dude.

But I digress. I came here tonight to tell you about “that time I was in Russia.”  Yeah, the real one!  I’m still pretty surprised myself.

As I finished up my undergraduate degree, I signed on for a 10-week mission trip traveling through both halves of Europe.  As a choir, we prepared spirituals and other music to sing in public, in recital halls, in churches, on street corners. And in every town, we met (and often stayed with) locals – my favorite part.

In late June, we spent about 3 weeks in Eastern Europe, Belorussia, and Russia. I’ll save the long versions of the story for another day, but here are a few highlights:

Um, monuments.  Russians know how to do spectacle. You haven’t seen a WW2 monument until you’ve seen the ones Russia built. Or the countries under Soviet rule.  My first experience with this came in Brest (Belorussia), where the pock-marked brick fortress outside the city held off the Germans …. for a bit.

But if you really want to see grandeur, check out the statue within the fortress park commemorating the Russian soldiers.  This photographer’s shot captures a gigantic granite solder crawling for water; behind him a huge head stares across the plains.

Russians love dill. It’s unnatural, and if I never see that herb again, it’ll still be too soon.  We ate tomatoes and cucumbers sliced and sprinkled with dill,  we had fish with dill, they put dill on slices of raw pork fat (ew), the borscht was probably garnished with dill.    Beets and dill.  Dill and cucumbers.  Dill on dill.   It was a dill-pocalypse.

When we weren’t being hounded by the herb of doom, our hosts served us warm fizzy water (cold stuff is bad for you, so they said), hot tea and coffee (in high summer), and the most delightful fruit juice called, generically, “sok” – which is just a term for “juice.” (The O is long, so “sok” sounds like “soak.”)

I’ve asked my Russian friends how it’s made; the best I could get was this:   layer a big jar (like a sun-tea jar) with fresh fruit and sugar. Pour in boiling water. Immediately can the jar or cap & sterilize it, and then flip it upside down. Leave for several months.  When you open the jar, the resulting liquid is smooth and thick, like sunshine in a jar.  I’ve never experienced anything like it apart from our time with people in Russia, Belorussia, and to an extent Poland.  (I Google’d it… came up with a recipe in a Slavic language I can’t read….. my search goes on…..)

It was in Russia that I had my first Magnum bar — that was heaven on earth.  You can buy them in America now, but back then, a plane ticket across the Pond was the price for enjoyment.  They sold them in Western Europe too; I just happened to eat my first Magnum in Moscow, I think. Or maybe Smolensk….. hafta check my trip journal.

But aside from meeting many very kind people (including several pastors with stories of years lost to labor campus because the Soviet Union pounded on churches) and learning to eat fish for breakfast (sometimes) (it was gross), I’ve got some weird stories too.

Like the time I peed in No Man’s Land at midnight-thirty, a Bathroom Stop Without A Country.

— Although the Soviet Union had fallen by the time I went to Russia, all travel required specific visas. My passport from that year is stamped with plant of border crossings – the EU hadn’t kicked in yet either.   We discovered (as a group) that our contact in Russia who set up meetings for us miscalculated our visa dates and we were scheduled to be in the country a day longer than our visas allowed.  And you haven’t seen anything like a border crossing into the former Eastern bloc (at that time) ….. lines could last for hours.  Somehow our team leaders knew a way to cut us into the front of the line. I’m so happy we didn’t get shot……

–No Man’s Land is the half mile or so of neutral land in between two countries, the Neutral Zone if you will.

-Eastern Europe really isn’t into rest stops or public bathrooms. In fact, we were munching a quick lunch as a team in far eastern Poland when our team leader explained that travel day pit stops would take place “in the woods” from now on.  That was a …..bonding experience…..?   “Boys take one side of the road, girls go to the other.”

So what do you do when 1) you’re not supposed to be in a country today but 2) you have a church service to do anyway, so 3) you  decide to do your border crossing in the middle of the night in hopes that the border guards will either be more forgiving or at least sleepy …. which puts you on the road for an overnight 8-hour marathon drive from western Russia to Brest, Belorussia, and to top it all off, it’s nearly 2am and  4) you all really gotta pee?

Well, you go in No-Man’s Land! 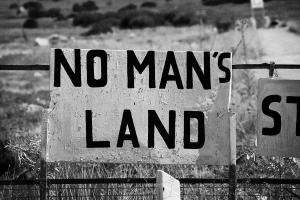 The vans pulled through the border crossing (always a bit tense), and as soon as the guard house was out of sight, we pulled over.  It was quite cold, despite being high summer. The roadside was incredibly dark;  I’d been sleeping (since I volunteered to stay up through the graveyard shift later to help keep the drivers awake) and I groggily stumbled down into the deep side ditch to take care of business.  We weren’t going to have any other opportunities for quite a while.

I gotta admit, we did giggle a little later.  It’s not every day you get to break international law…. I mean, I’m sure you’re not supposed to use boundary land as a restroom.

I don’t remember much else from that night — we saw the most glorious full moon rise around 4am, as we passed through the flat eastern lands of Belorussia.  The driver and I were both dangerously close to nodding off by 5am, when we switched off and I crawled in back for a much-needed nap.

By 7am, we pulled into the outskirts of Brest to find an actual bathroom (a public outhouse; it was disgusting) and eat the only snack we could find: bars of thick, creamy, fat-filled Russian ice cream. (Seriously – the fat content in that cream was off the chain – you could feel it on your tongue.)

Of course, I’m leaving out all of the wonderful parts of traveling in the  East — to see St Basil’s cathedral with my own eyes, buying matryoshka dolls and chess sets in the outdoor Moscow market (come over and I’ll show them to you), singing a cappella in the amazing Smolensk cathedral, looking out across Moscow from our hotel room on the 8th floor.  It was a great experience, and I’d love to retrace many of those steps.  But I’ll stick to indoor toilets…..

Bonus story: I made only two phone calls home during the 10 weeks I was away — my, how life was different before everyone had a cell phone!) — so it was from  that Moscow hotel room that I rang my dad and my boyfriend both at 4am to say “I’m still alive!” (we’d been on the road 4 weeks) and “I love you!”   My dad was stoic and surprised that I would call him just to say I was fine.  My boyfriend (who is now my husband) was a lot more excited once he woke up enough to realize what was happening, but I’m not sure he ever quite forgave me for the 4am wake-up call. 🙂