When I finally got a chance to look at the world for a moment tonight after work (it’s been a busy week), the world’s feed is awash with commentary on the 50th anniversary of MLK’s “I have a dream” speech at the March on Washington.

Actually, the day entered my consciousness because a Facebook friend posted that the Republican absence at the big commemoration on the Mall seemed to offer a conspicuous commentary on Republican attitudes toward racial justice.

So I guess I didn’t even get 30 seconds of uncontroversial peace in which to contemplate Dr King’s rhetorical brilliance, biblical themes, or beautiful words. 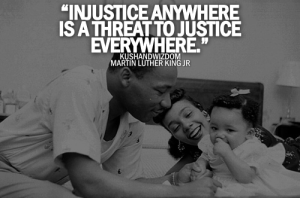 Let me back up.

I grew up in the North, a land full of its own social injustice, brokenness, and racism and economic inequality.  My dad was a steelworker forced into retirement when he woke up one morning half-blind.  My mom worked at a finance company and her salary kept us fed and a roof over our heads, but even at the best of times I grew up “working poor.”

In an odd soup of conservative social politics, my dad’s union membership, crushing economic realities (Fayette county’s economy died on the table in the mid 80s and hadn’t resurrected before I left for good in the late 90s), fundamentalist Christian upbringing — I went to school.  A small private Christian school.

Everybody descended from a European immigrant who landed in Southwestern PA to work in the glass factories, coal mines, or steel mills.  It was a very white place, but white culture was a lot more interesting where I grew up.  If your last name didn’t include 14 letters with the wrong balance of consonants to vowels, you probably weren’t a native Western Pennsylvanian.

My view of black/white racism was formed primarily through the lens of my dad’s experiences at the mill.  He despised people who wouldn’t work or proved lazy on the job. That derision crossed the color barrier, but he still categorized people by color.  I certainly grew up with a poor immigrant‘s view of racism: “Yeah, slavery would have been terrible.  So was growing up during the Great Depression with no food and an abusive Italian father.”

My school didn’t do Black History Month.  (Did they have that in the 80s?)  It was a good school. Really it was.  But the Civil Rights movement wasn’t part of the curriculum.  Except to hear about the race riots, the Malcolm X violence, and the assassination of Dr. King.

I saw Coretta Scott King on the television sometimes, especially on the anniversaries of the killing or the speeches.  My dad usually changed the channel.

All of my education has been white and Christian. I must acknowledge this bias, this direction in my thinking.  I’m happy to live in a much more diverse neighborhood now (we’re unified by our socioeconomic class), but I still drive to my very Caucasian workplace or church in my car, listening to stereotypical white-people music.

I have three college degrees, all of them Christian, all of them surrounded mainly by working class and middle class people of general American descent.   I don’t know where I first heard that Dr King plagiarized his doctoral dissertation – I think that came during my high school years.  But the ad hominem was powerful.  The message of King’s speech was suspect.  He was suspect.  He didn’t see the Bible the right way.  He didn’t really believe the Gospel. He may have even been Communist.

But I wasn’t racist.  No.  Racists did things like the South did – enslaved people, imprisoned them without trial or stripped them of voting rights. We weren’t like that.

My college wasn’t like that either, right? Granted, interracial dating was banned because it was ungodly. And I hardly knew any people of color unless they were international students.  But that’s because “black people didn’t want to come to Bob Jones.  We’d love to have more of them here!”

Thankfully, my education finally took a turn for balance. My M Ed coursework at Covenant College introduced me to a view of the Kingdom that values justice, that elevates the humanity of all people because we all bear God’s image.

An understanding of the Gospel that’s bigger than the mess humanity’s in because of our sin and brokenness.

A view of redemption that demands justice in this world and the next.

God calls Himself the defender of the orphan, the widow, the oppressed, the slave, the immigrant, the downtrodden.  A Righteous King is a ruler who tends to the needs of the poor and those who cannot defend themselves.

This is wound into the biblical narrative, now that I realize it’s there.

My first class at Covenant slammed me between the eyes with the idea that capitalism might not actually equal “biblical,” that American democracy was not equivalent to Christian living.

It took me days to recover.

As I taught classes of fresh-eyed middle and high schoolers at NCS, I began reading all the literature that wasn’t even in my school library growing up and certainly not in the (BJUP and Beka Book) textbooks:  Roll of Thunder, Hear My Cry.  A Thousand Never Evers.  To Kill a Mockingbird.  Invisible Man.  Black Boy.  The poetry of the Harlem Renaissance.  Their Eyes Were Watching God.

I read Dr King’s speech for the first time in 2003, I think.  It was printed in my 8th grade literature book at the end of a unit on the American experience.  I thought, “Hey! It’s a speech! Maybe I can find it on YouTube.”  Being a first year teacher and always behind, I probably didn’t even read it before showing the speech to the class.

There are days when I feel like I’m just now discovering the Gospel for the first time.  And that I live in a sea of hate.

Republicans had a separate luncheon today rather than join the commemoration at the Mall.  Why is that cool with people?

My fellow Christian Facebookers slam the very idea that we even need to discuss race in America anymore. It’s a liberal agenda thing, a ploy to divert our attention from the real travesties of the world, like Obamacare. On Twitter, some tea party person was giving it to Al Sharpton because he talked about Peace today but urged people to riot over Trayvon Martin a month ago.

Friends, the racial question in America isn’t answered.  The fights breaking out over voting laws aren’t happening in a neat and tidy middle-class vacuum.  The erosion of Miranda rights and checks on the power of the police have a real effect on people in poverty.   Our criminal justice system imprisons people of color at a much higher rate than whites or Asians when they’re arrested for the exact same crime.

When Erskine held a MLK Day event in January, I attended.  It was the first moment in my life — education or work — where I was part of a corporate commemoration of that January holiday (instead of staying home to watch TV).

A coworker at Erskine patiently explains the Black experience to me over our lunch breaks.  …. I had no idea…..

Every lunch break is a new lesson, a new revelation.

Fifty years after Dr King made his speech, I can only acknowledge my own journey out of complicit and stated racism into a biblical understanding of humanity — one that restores dignity to those who were often abused in the name of Christ.

“I refuse to accept the view that mankind is so tragically bound to the starless midnight of racism and war that the bright daybreak of peace and brotherhood can never become a reality.”  ~MLK Jr, Nobel Prize Acceptance speech

A friend’s thoughtful perspective on the Trayvon Martin case