On All Things Directorial

...Musings on theater, life, and directing…. seasoned with a bit of “after midnight.” And written in the crucible of preparing the Advanced Drama students for their production of And Then There Were None.

I don’t “do theater” for a living. (See, the proof is in the fact that I generally spell “theater” the American way instead of the fancy-schmancy artistic old British spelling with the -re ending.)

I do find myself “doing theater” — as I have for the past 6 years — as an interesting side path to my work teaching English to middle and high schoolers. What started in 2005 as a 7th grade unit on dramatic literature (culminating in some in-house performances that simultaneously brought a measure of healing and comradeship to an otherwise brutally-fractured class) has grown into a foundational stone for the upper school at NCS. Who would have foreseen it? This spring finds us doing two major shows (unwisely, probably, but that’s how it turned out). So my soul has belonged to Agatha Christie’s And Then There Were None, knowing that January 27th is breathing down my neck. (Opening night.) 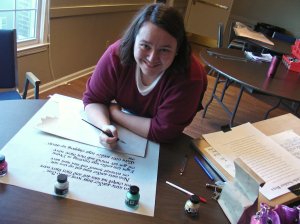 That’s me working to letter the big “Ten Little Indians” poem that ties the play together.

Tonight I finally made it to my couch weary of body and exhausted in mind sometime around 9pm. It’s been a long week, coming on the heels of horrific schedule headaches from the big snowstorm and before that, several illnesses in my cast members. Coart likes to say “Anything worth doing is hard.”  I’m not sure that the converse of the statement is necessarily true (isn’t that a logical fallacy anyway? lol) but it’s certainly one of the pithy aphorisms that’s pulling me through the long days. “Anything hard must be worth doing” … right?

Working with students always teaches me far more than I teach them. I was struck today by the wonderful good-naturedness of this group of 7 students who have survived auditions, reading rehearsals, blocking, hours of work memorizing lines, illness, losing a cast member at the last minute, and now long “full runs” … all stacked on top of their normal school day and wedged into “free hours” they have before tackling homework.

I’m not sure I would be so charitable were I in their shoes, but these older, more experienced students chose this play as their semester project and they are still very excited about putting on a good show.  They’re so excited that most of them volunteered themselves to go paint the set tomorrow because they want it to look better. This is righteousness outworked (not just thinking, not just critiquing… but doing.) 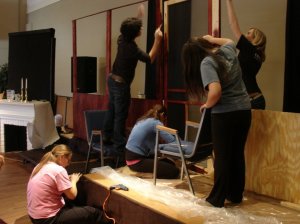 The kids came in to paint the set.

I love projects that blend faculty (or adults in general) with students. We sharpen each other — the young’uns bring enthusiasm and energy and a strong impetus against the stodgy inertia that seems to overtake adults, while the adults anchor the cast with seasoned calm and a rich flow of life experience with which to flesh out characters.

In fact, I’d say the student-faculty partnership that pervades NCS culture is more important than anything else we do. Should we not perceive Paul’s inspired wisdom when he directed the Cretan church under Titus to value mentoring relationships as the backbone of Christian discipleship?

People generally don’t understand exactly why Coart & I bother “doing plays” at NCS.  ….It’s not because we love doing theater. (It’s not that we dislike it either; but neither of us were trained in this and sometimes the learning curve slaps us around pretty hard.)   I don’t try to correct the crowds who assume I “love” acting, directing, or performance in general. Actually, I have to fight against every fiber of emotional control built into my personality just to begin thinking about playing a role.

It’s also not because doing theater is easy, or a cop-out for teaching — anyone who chooses a 60+ hour workweek without better cause is probably insane.

And I have no desire to shut out music or art or dance or any of the other creative arts from the lives of students (though life quickly teaches all of us that we have only so many hours to spend). Lucky or unlucky, our students “benefit” from the package of gifts endowed to Coart and me, which lie more with speaking than art or music. So. Theater it is.

Rather, I pull myself out of bed and through an over-full day of teaching (this week: Norse mythology, Latin noun plurals, American Realist literature, Hamlet Act 2, poetry, and basic script analysis) and into a long afternoon of rehearsal by remembering that my greatest joy as a teacher is to see a young person grow from shy un-confidence (is that a word?) into a fearless, friendly soul: a person who has learned the art of observing human nature and recreating it; of one who soaks up the Story in the hopes that some bit of Heaven-Redemption finds its way to earth whenever Story Truth strikes the heart of the performer (first) and the audience.

I really don’t have a clue what a director is supposed to do.  Well, some details are obvious project management — find a performance space, select a script, make the casting decisions after auditions, develop a plan for studying and interpreting the text and then bringing that text to life by creating a “safe” space where actors can take themselves through a journey of discovery within the story and setting and characters. It’s all quite nebulous, really…  “The best in this kind are but shadows,” Shakespeare puts into the mouth of Theseus in Midsummer Night’s Dream.

A play doesn’t succeed at NCS because the director did a “good job.”  We tell stories well when I succeed in getting the students to understand first and then internalize and finally transmit the soul of a tale.  Unfortunately my cast members lack buttons, knobs, or efficient input devices.  Most rehearsal days simply serve as a reminder of everything I haven’t accomplished.  I think I’ve bandaged my ego 12 times this week.

For us, the “product” isn’t so much the point as the “process.” This is education, not theater business (though I still have a budget and it needles me). I want our shows to be qualitatively good: an engaging experience for the audience and worthy of their time. But that has to take second seat to my deeper goal of raising up men and women who understand Kingdom living.

These goals have to work together. The kids must learn to invest great labor in a project whose outcome is out of their control (and mine, to a large extent).  We are only as strong as our weakest cast member, yet seeing students rally around a kid who’s failed them is incredible. The missteps and inexperience of students slowly mature into something beautiful. The Story begins to shine, a sum greater than the actor’s parts. And it’s magic.

These past 3 hard, frustrating, difficult, sleep-depriving weeks brought me a deep gift as compensation:  the opportunity to see the mettle of our seniors and juniors tested.  Their kindness, enthusiasm, willing hearts, hard work, joyful wit — all have lifted my spirits.

To see them grow, individually, in a skill that isn’t “natural” for most of them reminds me that we often “need” what we don’t particularly “want.”   I love my job in all of its exhausting, stressful avenues.  And I love my students.

We offer to you the work of our hands because God created Story-lovers.
Nothing would thrill us more than for you to share in our joy. 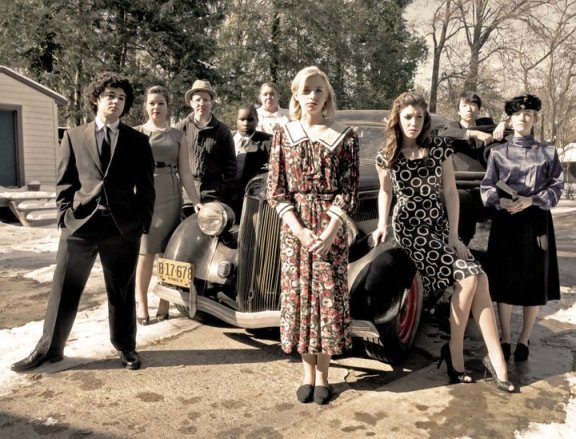 Cast Photo. New Covenant School production of And Then There Were None, January 2011. Not pictured: John Ellis