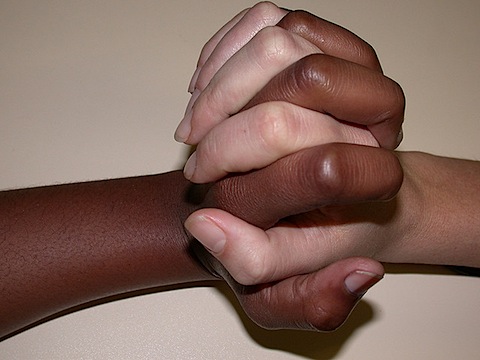 Did a day of VBS with Jack today.

Sometimes you hear things that are very sad, and very hard to deal with in a group of 4 year olds… but they’re real nonetheless.

M——, a kid who lives at Calvary Home right now, flashed a semi-toothless smile at us when he came in the door. I instantly labeled him “a firecracker” — you can just tell. haha.  I was greeting all the kids by name — reading their nametags. He instantly stared me down when I said “Hey, M!” and asked bluntly, “How do you know my name?”

I told him I read it off his nametag … and wondered that he was so forward about something like that. Most kids just assume you know who they are … or take it at face value that you mean well.

A few minutes later, he explained he lived in foster care. I thought, “Ah. That explains his behavior.”  And his next sentence was just sad, “Yeah my mommy is bad. She hit my sister on the leg.”  Later, “My mommy tried to hurt me with a knife.”

Jack was telling the missionary story for this group (thank you, Jack!!) and he gave me a worried look during these outbreaks. It’s hard to know what to do when 99% of the kids in the group (about a dozen) all come from safe, sheltered suburbia — upper or high middle class homes with two parents and plenty of money. The other little kids have rarely heard their parents even raise their voice, much less been subjected to the brutality of an abusive mother and being removed from their homes to live in foster care.

M’s older sister H was so traumatized when she arrived at CHC that she was catatonic. She sat unresponsive for days, with no flickering of emotion or reaction to anything that happened around her. When she finally broke out of that shell, according to Jack, she instantly became very matronly and nurturing toward the other kids in CHC, to the point that her “maturity” is unnatural and unsettling.  You wonder what kinds of emotional scars will emerge in future years.

Fortunately, the other 4 year olds today were to busy not paying attention to M that they didn’t react to his blunt tales of abuse

If this had been a school setting, I guess I would contact parents in the class afterward to say, “You need to have a conversation with your child tonight about the fact that not all kids have good parents. Some parents hurt their children. And we hope your kid will learn to be a loving friend toward M and his older sister, who is recovering from this kind of abuse. We need for our classroom to be a safe place for him, and in order for that to work, you need to talk to your kids about what this world is really like.”

I know there are parents who would fight against taking away their kid’s “innocence.”

But I think that perhaps, we would all be much better people if we had to look M and H (and the thousands of people like them) in the eyes every day.

While I’m here….
I really wish NCS would grant free tuition to any CHC kid, regardless of whether CHC can afford it. Kids like M & H need a loving, nurturing educational environment and i would wish our school would provide that as a matter of principle.  *sighs*