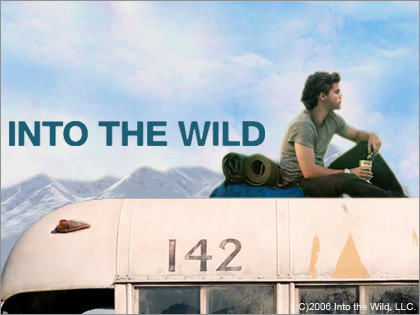 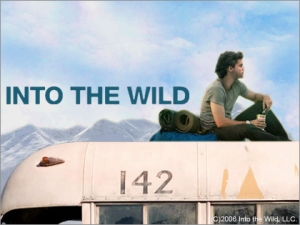 Into the Wild (recent film, now on DVD) recounts the true story of a young man –Christopher– who headed by himself into the Alaskan wilderness to explore his philosophy that man needs only nature’s honesty to live a fulfilled, enlightened life.

To him, truth is more important than love, than society, than anything (parroting Thoreau).
Many experiences swirled together in his life to strip from him any faith in society:  his parents’ constant fighting, their materialism, their hypocrisy.  He took his copies of Thoreau and Emerson and London and sold everything else in a search for wisdom. I’ll not say anything else lest I spoil the plot.

I recommend the film for several reasons, including its artistry and theme.

Early in the film, Jack asked us all whether the hippie lifestyle appealed to any of us — carefree abandonment to nature and a life unencumbered by responsibility.

You’d think, coming off a hectic and exhausting school year, my answer would be “heck yes.”
But it’s not.

The more I think about it, the more I find Into the Wild an excellent incarnation of the selfishness that drives us to shirk the incredible effort it takes to overcome the Fall.

Think about it:  Why is the hippie lifestyle such a draw?

Because at its core, it’s always easier to walk away from humanity than work to overcome the effects of sin in this world.

Christopher saw the hypocrisy and sin of his parents, but not his own.

He absorbed Thoreau’s Transcendental ideas without heeding the corrective warnings of Jack London. [By the way, his story doesn’t end there … so watch the movie or read the book.]

The transient lifestyle appeals because living in a commune “off the land” means you escape being encumbered.  No one can claim your affections or demand your loyalty. This kind of freedom brings no responsibility.  But you utterly lose the power to (by God’s hand) bring beauty from ashes.

You forsake the burden of redemption — the messy, painful truth that Grace always costs the giver.

At one point in the movie, I said, “This is sad.  If this kid were to die, no one would really care.  He’s done nothing that actually lasts.”

Coart replied wisely, “More importantly, if this kid lives, no one will really care because his life won’t matter.”

Our very burdens which weigh down our hearts and make us groan at times under the load (especially those rare moments of clear sight, when we see our sin for what it is or encounter brokenness in its harsh ugliness)– those very burdensome tasks are what make our lives count for something beyond ourselves.

Do you want this world to be different than how you found it?

It will cost you something.