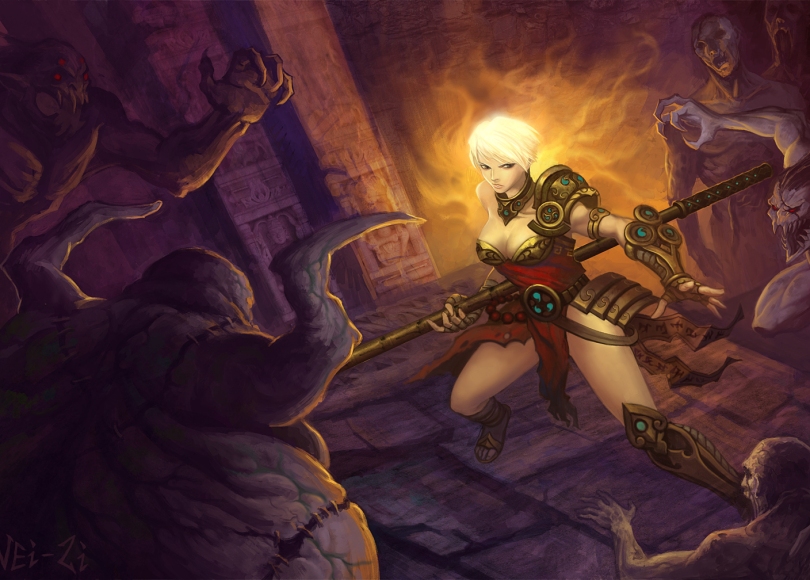 The birds twitter so much more loudly out here in the forest. A benefit or downside, who can tell? Such rustic living rarely appeals to me but perhaps a few weeks of country travel will do me good.  It would do more good if this were a solitary journey, but the gods have too sharp a wit or too much scorn for my life to offer me such solace.

Maester Pollos suggested that recording my thoughts would enable me to recover more quickly from the horrible events of past weeks. Even to pen that sentence causes my hand to shake. I do not wish to remember … yet I cannot forget.

Pollos’ words aside, I must concentrate upon a solution to this problem. Luce sits bound to slavery in my stead until I return. I must make haste. I should have never fallen into this predicament. Overconfidence. Hasty decisions. A poor gamble. Bad luck. A heap of cliches cannot alter my reality: my sister in the hands of Syneth. What a disgusting brute. A hundred thousand florin stand between me and her freedom.

The children’s stories pretended that wizards could simply conjure gold out of thin air, or transmute lead. If only.

My feet are tired. I had forgotten how long it takes to walk in these distant regions.  I should have ridden here. Who knew no bloody farmers would be on the roads this week? That is strange….

I wonder if Thistle will be as dark and pensive as she was for our last quest. Druids are a difficult lot to manage. Always off, lurking about in animal form. It’s unnatural. But she has her ways of finding adventures worth my time.

Without Thistle’s sudden openness to a traveling companion, I would be stuck in the capital, grinding away at menial alchemy to earn enough coin to bribe thugs to rob one of the rich bastards traveling through the mountains. A hundred thousand florin! How will I ever repay it.

I must find something valuable on this journey. Steal, barter, conjure, I must not fail.  Sell my soul to the Dragon himself if it were worth that much.

I doubt that it is.

There’s the typical inn, with its typical innkeeper, peasants, and cow-herds. Why do all these places look the same? You’d think there were a model village in the sky which the gods sent among men as a joke. “Look, Behedon! It’s another village with an inn in the middle! Teehee!”  I hate to be the elf who’s always muttering about how good things were back home, but really…..

Apparently I’ve arrived before the rest of the party. Thistle’s note was  short and lacking in detail. I understand that we are to gather at the Inn tomorrow eve. No specific purpose is listed. Not unusual for the Druids; they’re so damned closed-mouthed. But it would be nice to know what I’m walking into.

I had to pack light for this journey on foot, so I’ve got only a few spell books with me. Hopefully some time along the way to study a bit. I’m rusty on some of the fighting spells. Must not be caught unprepared — it’s amazing what one can take after a successful Intimidation spell is cast.

Gods preserve my immortal soul. I’m not sure how much will be left of it once this is done. Luce, hold on. Syneth is a brute but I do not think he is lecherous. Oh gods, I hope I’m right.

The inkeep is a nice fellow. Apparently he invites everyone to dinner in the evenings. I appreciate the nod toward the Old Ways, when hospitality was a virtue no one dared to omit. Traditions are lax in a land cursed with bad leadership and plague.

Ptolemy, he calls himself. Yes, I twitched when I heard it – as I’ve done when writing it. Such an old name to be found on a living being! One must wonder whether his parents were keepers of books or simply enamored with old-sounding names. These outer reaches are always full of surprises.

I had hoped to hear some word from Luce by now. I told her that I was headed here on business and I honestly did not think Syneth would be so stingy as to bar her from writing. It is her misfortune that she appears so young of face, for her apparent youth makes her an easy target for mistreatment. I swear, if one golden hair of her head has been harmed, I will use Syneth’s skin for my floor covering when I return.

I hear the sound of the gong; the call to dinner, I assume. Time to meet my strange bedfellows. Well, none of them will be in my bed, but ….

I’ve smelled roasting meat for hours now. There are more children in this town than I expected – I suppose all of them must be represented in the pack scurrying about downstairs to get underfoot the cooks as they prepare to carve up the boar. At least this tiny corner of Nowhere has good food.

The room is still. Supper was excellent. Conversation intriguing. Possibilities emerge from a hazy realm. Possibilities that I might leverage into gold.

First an introduction to the others at the table. I owe it to my future self to set down a fine description of each:

Ptolemy. The host. Grey-haired but spry and warm, friendly, jovial. He bears himself as one with some measure of authority. A bit odd for an inkeep, no? But we all hide secrets these days. I shall leave him his secret, but he will not escape my notice. He is – or was – a man of power. Power cannot hide itself for long; it always emerges like a moth drawn toward flame.

Thistle. The elven Druid. She is lovely, mysterious. Just as I remember her. Her skills have improved as well – I saw her approach from the outer forests this afternoon as a mighty eagle. She perched and observed before dropping to the forest floor and transmuting into her regular form. I’m sure she believes no one saw her, but we mages are nothing if not observant. We have not had much opportunity to speak, but I gather Ptolemy was her contact here, and Ragnar’s rock is our purpose. I shall get to that….

Enefepa. The Bard. Even his damn name is annoying. It’s probably short for something utterly pretentious, like Enefepartham Magnifioso Garnitur Carandes. The Third. Pah! He wears a beard of multicolored stripes — of course — which clash against his riotous colored apparel – of course! Why must all these song masters be so ostentatious? It’s as if they cannot earn a living without assaulting more than one of our senses at a time.  Though I must be charitable and note that at least Neffie knows a good leafweed for his pipe and a sweet brandy for his flask, and he’s not bad at the mandolin. I have hardly heard him sing yet. Perhaps that’s another strike in his favor.

[Conor] the elven Templar. Argh. Of course a follower of Bahamet would lurk among us! Those blasted dragon worshippers never fail but to insert themselves into every inn, town, and adventure. This one is sturdy at least. A little too talkative but capable of decent fighting. He thinks he knows everything, but Neffie proved him wrong about the rock. At least there’s still humor in the universe.

Billie. The Bitch An elven adventurer with an attitude as ugly as her name. “Billie”? It sounds like the sputterings of a pot of stew on too hot a fire. She is clearly up to something. I do not trust this one. And she does not seem to trust Hodorian. The plot, as the writers say, grows thick.

Our other character at the table this evening deserving of attention was Ragnar the ranger, bold of words and deeds. He put forth one of the most unusual rocks I have ever seen. Black, heavy, untouched by fire, marked by a sign I have not seen but feel that I should know.

It is this sign that keeps me here by this fire, late into the night. It is the deep groan of the world that I heard in my soul after I touched it.

Why am I so afraid?

It is not just the shaking of my hand that prevents me from writing. Though I wonder whether anyone will be able to read this page with letters so poorly formed. But truly I cannot stay my hand from shaking.

I have seen that which I have only encountered in tales, in stories. The Dark Forms. The ones who appear and disappear from shadows, taking their prey with them silent as midnight.

It did not help that I am out of practice…. I have spent too many months now teaching novices to summon a ball of light rather than honing my own craft…..

No. I will not create reality by putting regrets into words. Forward. Forward. Mistakes lie behind, not ahead to mar my vision. I must be singleminded, focused.  We have a greater task now.