The other day, driving home from rehearsal, I chuckled to myself at a thought that I would probably say to friends in my living room but would never post to a public forum. It involved a Jehovah’s Witness Kingdom Hall sitting next to an overly enthusiastic Christmas decorator who seems to take extra joy at installing new holiday lights at this time of year.

Does my unwillingness to write a joke here about that irony make the thought bad in itself?  I’m not JW and I like my holidays, so it’s funny to me.  I have zero JW friends, so the risk to me personally of giving offense is slight. Yet as soon as this blog post hits the Internet, my private musings become public discourse, and they carry much more weight.

I’ve been blogging for over ten years now. Surely at some point I’ve said things I’d now disagree with. Am I held to today’s standards for what I wrote in 2005? Should I blow up everything I’ve ever written to ensure that Future Me won’t pay the price for Past Me’s immaturity or ignorance?

And if so, what’s the point of writing anything now?  What benefit does the “average person” gain from engaging in any social media or digital discourse that might outweigh any risk of being misunderstood (or rightly understood but on the wrong side of prevailing consensus)?

Though many science fiction writers predicted we’d have global communication, only Black Mirror (the British TV series) seems to grasp how horrific mass communication can be as it engages the darkest of human nature.  In the 90s, early netizens skirted around pedophiles in chat rooms across the world. In the early 2000s, AIM kept us awake late at night (“bing!”) with 17 message windows stacked across the screen. (And we were still trying to avoid predators.)

But I don’t think any of us realized what we were getting into when Facebook opened up to public membership or when Twitter invited us to encapsulate thoughts in a space smaller than a standard text message.  We live our lives publicly now, via Instagram histories of meals eaten and trips taken, alongside Facebook shares that mingle cat videos with political fights.

The Internet is a rough rodeo. Read any comment stream and examples of Cunningham’s Law quickly surface (the fastest way to the right answer on the Internet is to post the wrong information). It’s exhausting to be corrected non-stop for pedantic elements inside a larger post. But even Cunningham couldn’t have predicted the rancor and hate which accompany those corrections or disagreements. If you can’t handle someone insulting your grandmother and suggesting that you have incestuous relations with your mother on a regular basis, you probably shouldn’t post a comment in any public discussion.

What kind of world have we fostered, then, by moving the public square into cyberspace? A lonely, nasty, and dark one (if 2017 is any indication).

Our public and private spaces have bled into one confusing sphere.  What I think to myself in the car, I might choose to say to friends who share similar backgrounds and who would not be offended. But what I write – anywhere – is publicly owned in this 21st century, subject to scrutiny and the infinite memory of Google and internet trolls.  No conversation takes place within a limited audience anymore.

As a person grows in their understanding of the world, certain forms of humor stop being funny. And other observations move from public sharing to private chuckle. Hopefully I’m more aware of why some statements are offensive rather than merely a “joke in poor taste.” 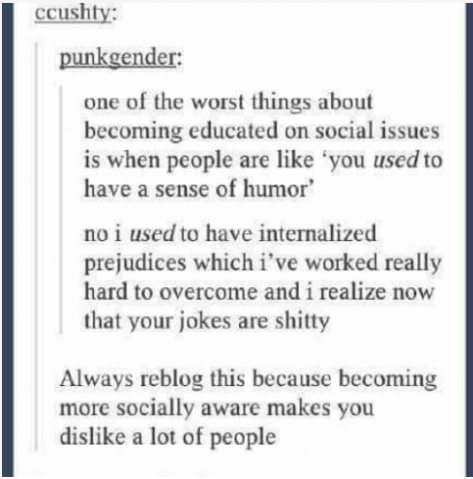 Yeah, this. There’s a lot of stuff I don’t laugh at anymore. #cringe

Reputation (or notoriety) is critical for a society where the driving currency of fame is likes, clicks, views, and ad revenue generation.  I recall a moment in a recent episode of The Orville (a Star Trek knock-off helmed by Seth MacFarlane that’s way better than I expected it to be).   Like in Star Trek, the Orville economy doesn’t require money because people have access to free material synthesis/replication for food, clothes, or supplies. The first officer comments to a junior officer that once money ceased to be an issue for people, reputation emerged as the primary currency of value.

Except that our new desire for protection also shuts down conversation when we need it most.

We all maintain an inner discourse rife with thoughts we’ve learned not to share because the risk is too high, even if as a society we usually benefit from airing thoughts, having them challenged by competing experiences, and growing in our understanding. (I had to add “usually” to that sentence because I’m not convinced, in a year when we saw real, live Nazis and bigots marching proudly in the streets, that all discourse is useful or helpful. Some public platforms degenerate discourse. But that’s a thought for another post.)

Our swirling political discourse occupies a minefield of prejudice, racism, political correctness, philosophical disagreement, political theory, and religious tenets.  We face critical conversations about what freedom of speech and belief mean when white supremacists are insisting on a seat at the table.  So a little prudence about what thoughts escape my mouth into the air is probably justified.

I have grown to realize that my life as a white, WASPy female includes privileges of someone with advanced education and white skin alongside the consequences of my parents’ actions and my own. I’m the product of my upbringing and my experiences, but I’ve also learned – often through conversation with others or reading which force me to consider other perspectives- that my experience is not the yardstick by which reality is measured.

The conservative Christianity that raised me pinned the label of evil onto a lot of concepts that a pluralistic society embraces: women holding positions of authority and power; freedom of personal expression and sexual expression; self-determination; non-traditional family groupings; non-Christian religions.  As I navigate what it means to be both Christian and American, those circles don’t nicely overlap.

For example, I have to face the implications of a patriarchal authority structure in the church and its negative effect on women, including rampant sexual harassment and abuse within Evangelical churches – a reckoning that’s yet to come. (Not that the Catholic church has succeeded much better. Toxic patriarchy is way worse when it’s located within enforced celibacy.)

I recognize that while my understanding of morality may guide which policies I support, not all people share that same perspective as they act out their values in the voting booth or public discourse. I’ve learned that some of my goals for others ought to be chosen by them for themselves, not enforced, in a pluralist republic like the United States.

These are confusing, difficult thoughts. I’ve been angry for ALL of 2017, nearly llivid by this point thanks to the legislative malpractice circus that led to the passage of a tax reform bill no Senator has even read, on top of six weeks of continual allegations and revelations of sexual abuse and harassment. I have zero chill right now about this stuff. 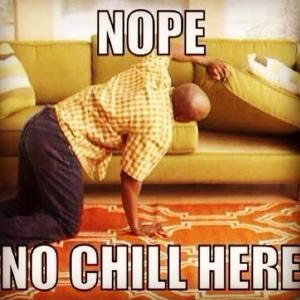 But I know many of us are confused and secretly worried about what we’re going to wake up to once the dust settles in 2018.

I’m thrilled that chronic sexual harassers are finally getting it but also scared for my male friends who I know are good and kind people, who may have at some point set their hand on a woman’s knee or mentioned how nice her blouse looked. I don’t want to see them punished for an honest mistake that could instead become a teachable moment for better behavior int he future.  And I want us to develop new vocabulary to describe the range of actions humans can take toward each other. A hand on a knee might lead some men toward engaging in sexual abuse but it is not the same as rape or abuse. We need places to discuss this, to hash out the language and the consequences.

We can’t use a sledgehammer to solve every problem in public life, yet it seems that the collapse of public and private discourse leaves us little else.

My point is this: we’re all caught in a messy web of ideas and half-baked thoughts and assumptions which form the foundation of how we see the world. And right now, social media is making it worse.

I’m not longing for us to return to some mythical good ol’ days. But it would be foolish not to recognize how much of a mess this is. There are few safe spaces to ask potentially explosive questions or to express doubt because no conversations are private anymore.

Perhaps, as with many of these problems, the solution lies in the Great Commandment to love our neighbor as ourselves. That starts with building an actual relationship with “neighbors,” whether in digital or physical proximity.  The hard work of community development lies at the heart of diffusing the social and political rancor we’re experiencing.  I do not believe we will gain ground any other way but by building relationships.